I Received an Unexpectedly Large Check from a Survey Company. Is it Real?

Many people often receive unexpected checks for hundreds or even thousands of dollars, supposedly from survey companies rewarding them for their efforts. The checks can look convincingly real (even holographs are common) and some of them actually are. However, sooner or later, it will be discovered that the checks are forgeries and the funds that they promise will never be received.

How to determine a check’s authenticity

To determine whether or not a check is real, the first question you need to ask yourself is, are you a member of the survey company issuing the check? If not, you can be almost positive that it is fake.

Next, check for contradictory information by checking who the issuer of the check is and if it’s the same as the company who wrote the accompanying letter. There are often very big inconsistencies in the issuer of the check, and who the letter is supposedly written by. People who facilitate these scams often have poor language skills and may use multiple and random company names and logos on their letters and checks in an attempt to seem legitimate.

In some cases a legitimate market research company may use a check issuing service from a company such as Chexx or Western Union, whose names will appear on the check itself. When this happens, the name on the letter will not be the same as the name on the check.

Please note that SurveyPolice DOES NOT issue checks for taking surveys. If you receive a check with our name on it, you can be certain it is fake!

Next, are you being asked to wire money to a Western Union, MoneyGram, or similar wire account? If the check is supposedly part one of a large sum you are to receive, but to receive the full total you must first wire money to an account, you are being duped. DO NOT wire money to anyone. Here’s an example of what can happen:

Steven receives a letter and a check for $1100, congratulating him on completing a long survey (or for showing interest in being a mystery shopper, for winning a contest, etc.). The letter informs Steven that he is entitled to a total sum of $8,000. However, in order to receive the full $8,000, Steven must first verify his identity by making a wire transfer payment of $600 to a Western Union account. To gain Steven’s trust, the letter says that even though $600 needs to be wired, the enclosed check for $1100 will more than cover the amount of the wire payment. Steven takes the check and deposits it into his bank account. Because most banks will make the funds from a check available within a few days, even if the funds have not actually cleared, Steven’s bank account balance shows the additional $1100. Meanwhile, he wires $600 to the Western Union account. A few days later he is notified by his bank that the check is bogus. To top it off, the $600 he wired to the Western Union account is forever gone and not recoverable.

Potential victims can be contacted by both letter mail and e-mail. Take a look at this example of a fake e-mail supposedly from Pinecone Research with instructions for wiring $990.

If you still think your check might be real, contact the issuing company directly to verify its authenticity. Consult the SurveyPolice Directory to find their contact information, and give them a call. If the company is not listed in our directory, use a search engine to access their official company website. If the check is real, the company will tell you.

How the scam works

Fake check scams are an example of a typical “Nigerian scam”, even though, despite the name, they do not always originate from Nigeria. You may have come across a similar scam in an email you have probably received, informing you that you are heir to a great fortune, or have won a massive lottery, and to access the funds, you must wire some money overseas. These types of emails might be easier to identify as scams, as the dollar amounts are typically astronomical – in the millions or even billions of dollars. When fraudsters disguise themselves as market research companies however, the dollar amounts they quote are usually a lot lower, and therefore more believable. 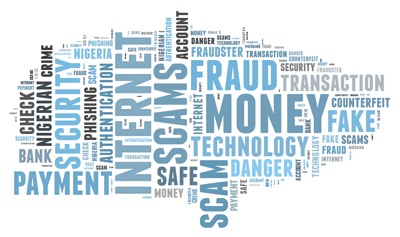 Fraudsters who act as online survey companies may start off by visiting a legitimate company’s website and copying and pasting their logo and mailing address into a template to create some official-looking letterhead. They then write some copy on the letterhead, notifying the victim they are entitled to a tidy sum of money.

They might even do some research and sign the bottom of the letter with an actual employee’s name from a legitimate survey company. A phone number may be included in the letter, and if called, might even be answered by an actual person, assuring the victim that the check is real and the letter is not a scam. Again, all of this information is pulled from the company’s website.

At this point, many people become victims, especially if they talk to a live person over the phone. However, remember that anyone can buy a 1-800 number and pass themselves off as someone who they are not. By cross-referencing the phone number in the letter with a number you find on an official company website, you will quickly determine whether there is a match.

With the letter written, the fraudsters proceed to print a check, often using accounting software and actual blank checks, which can explain why the checks themselves may pass counterfeit tests that a bank may have in place. According to Wikipedia, some of these checks may even clear temporarily, however, eventually it will be discovered that the check is a forgery.

The fraudsters then address the letter and check to you, whose address they acquired from any number of sources; you may have provided your personal information to a suspicious website at some point, your address may have been sold by a legitimate company who you dealt with in the past, etc. The envelopes are often mailed from “safe” countries including USA, UK, Canada, etc. which is, ironically, often where the fraudsters themselves reside.

Even if a very small percentage of people respond to these letters, the effort put in by the scammers pays off. Not only do these criminals try to defraud their victims of hundreds or even thousands of dollars, but company reputations are harmed when these scammers disguise themselves as legitimate companies whom they are actually in no way affiliated with.

What to do if you have been contacted

DO NOT respond to any suspicious emails/letters you receive. Most countries have police departments who specialize in fraud only AFTER a victim has lost money. However, most countries are in the process of implementing a centralized location for reporting suspicious letters and emails, before any financial losses have occurred.

In Canada, report any suspicious letters/emails you receive to the Canadian Anti-Fraud Center.

In the US, report suspicious emails to the Internet Crime Complaint Center (IC3).

Do your friends and families a favor and keep them informed about any convincing-looking messages you receive. Education is one of the most powerful tools you can use in ensuring that you or someone you know does not fall victim to a scam.

It’s really important to educate yourself and others you care about with these matters, as criminals who engage in these scams rarely get reprimanded. They often work together, spread out across different countries which have different laws. They are difficult to trace and use tools like disposable cell phones, and wire accounts such as Western Union, because they know that internationally, they are especially difficult to trace. They might even hire insiders working at banks to help facilitate these scams.

In conclusion, remember the old adage: if it’s too good to be true, it probably is. Don’t let greed get the best of you – if you receive a surprise check in the mail, the end surprise might be a nasty one.

If you’re interested in actually making money taking surveys, take a look at our top user ranked survey sites. These websites are the highest rated on SurveyPolice, as decided by our users, who have left thousands of reviews.