Why do people use proxies and VPNs?

Some survey takers may wish to conceal their country of origin so that they can join survey panels and take surveys that they would otherwise be ineligible for. Others may wish to keep their activities online in general hidden, so they use proxies and VPN services. Still others may be accessing surveys from a workplace which may by default use a VPN.

Exactly what are proxies and VPNs?

An open proxy is a server that acts as an intermediary between you and the internet. This go-between will have its own IP address so anytime you or others use the proxy, you will all appear to have the same IP address. Proxies do not typically encrypt data and are less resource-intensive than VPNs.

A VPN is a Virtual Private Network and an encrypted “tunnel” between you and the host server. Websites you’ve visited are hidden to an outsider, as the only thing that’s visible to your internet service provider is that you’ve connected to a VPN. Your activities while using it are completely out of site. Note that as a security measure, many workplaces have their own VPNs.

Why you should avoid using free proxy and VPN services

At best, free proxy services are often run by unscrupulous people who will mine your personal data and will start feeding you advertisements based on your preferences. At worst, you may have any credit card information you enter online stolen, and your computer may become infected with malware or viruses. Many of these services will at the very least, keep basic logs of what their users are doing online while others may go as far as installing keystroke logging software on their subscriber’s computers when the proxy/VPN software is downloaded.

Running a proxy service is not free, so the people offering such services will ensure that their end users are covering their expenses (and then some!) Before subscribing to such services, you might want to re-valuate why you feel the need to fully conceal your identity online to begin with.

VPNs in the workplace

Many employers use a VPN mainly in an effort to control the websites their employees have access to. Social media sites such as Facebook and Twitter are frequently blocked through use of a workplace VPN. Although taking surveys at work via your employer’s VPN may not present problems on the survey company’s side of things, bear in mind that your employer may be monitoring the websites you access and your online activities in general.

Although survey companies (and GPT websites for that matter) know that IP addresses eventually change, many will still monitor their members IP addresses for inconsistencies. For instance, if when you join a survey site, you say you’re from the United States, but your IP address is from Germany one day, and Canada the next, you may raise some red flags.

Proxy services also tend to use certain ranges of IP addresses. So any given service will often use the same range of IPs which are published in lists and easily obtained by anyone including market research companies. If a survey panel knows the range of IPs one of these services uses, they may block the range entirely, thereby blocking you.

Consequences of using a proxy

You may luck out and avoid experiencing anything especially negative by using a proxy, but be forewarned that if you use one, you may be putting your survey earnings or your account at risk; if you try to request payment, a survey site may ask you some questions to verify your identity, or at worst, may entirely cancel your account.

If you’re going to use a proxy service, be sure to read the survey site’s terms of service agreement, as sometimes proxy usage is listed as a service that is explicitly forbidden when used in conjunction with a survey site.

Still want to hide your identity? 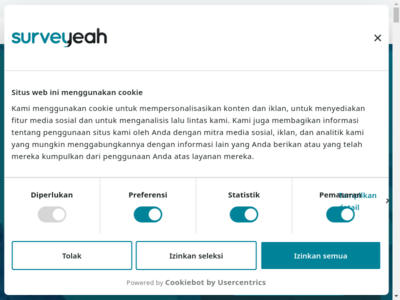 If one of the reasons you prefer to use proxies is to hide your identity online, but you still enjoy taking surveys, you might want to check out Surveyeah. They are the only survey site we are aware of where you can take surveys without providing any contact information besides your postal code, email, gender and year of birth.

Although we don’t recommend that you access either of these websites using a proxy or VPN, they are certainly friendlier than other survey sites in terms of demonstrating their respect for user privacy.

If you still insist on using a proxy or VPN service, we recommend that you disable it when you join a new survey site or are accessing surveys, so as to avoid potential problems down the road.