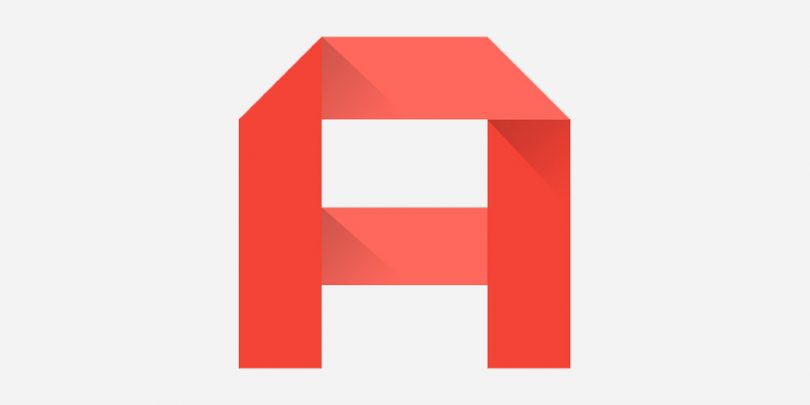 AttaPoll is a mobile app, available across the world on iOS and Android, which allows you to earn money by answering surveys. There is no desktop website, nor any methods of making money other than answering surveys and referring your friends to the app.

This simple surveys app focuses on a few things, but does it do them well?

In this review, you’ll discover how AttaPoll works, how much cash you can expect to earn using it and how it compares to similar smartphone apps.

Note: Some of the below are affiliate links which helps cover our costs and keeps SurveyPolice free. Full affiliate disclosure here.

The sign-up process is as easy as it gets. Simply visit Google Play or the Apple Store to download the Attapoll app, agree to the terms and conditions, confirm your email address, and you’re done.

From there, you’ll see a list of surveys that you’re eligible to answer. On each survey, you’ll see the reward on offer in U.S dollars, plus the estimated amount of time to take the survey. Your first surveys will take less than one minute, and will relate to your demographic information. You can complete as many or as few surveys as you wish.

There’s a ‘Check Balance’ button at the bottom of the home dashboard, which will take you to a page showing how much money is in your account. This page also allows you to cash out your earnings, once you’ve reached the necessary withdrawal threshold.

That’s all you need to know about the Attapoll surveys app. The simplicity of it is a real selling point.

The survey questions are set by clients of Attapoll looking for market research around their niche. As such, the surveys are based on a broad range of topics.

You can filter your page so that only surveys of a certain length appear. This is a relatively unique feature and could help if you’re pressed for time.

At the start of the survey, you’ll be asked some qualifying questions to ensure you’re the type of person that the client wants answers from. If you’re not, you’ll be disqualified from the survey without being given the chance to finish it. No money will be earned in this case.

In the reviews of this app on the iOS and Google Play store, several users complained that they were disqualified a long way into the survey. Unfortunately, when this happens, it’s one of the most frustrating aspects of paid survey websites. No-one likes having their time wasted. If you hate being disqualified from surveys, check out sites that will pay you for disqualifications.

Referring your friends to AttaPoll 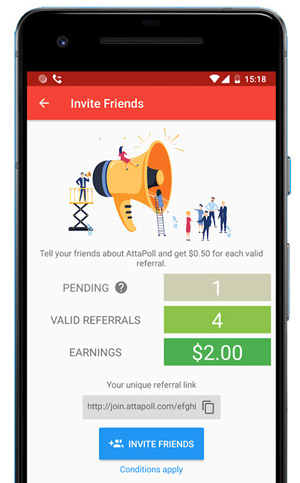 To refer your friends to AttaPoll, click the menu button in the top-left of the screen and navigate to ‘Invite Friends’.

For every person who joins the app using you’ll link and completes three surveys, you’ll be given 50 credits (around $0.50).

This rewards pales in comparison to the survey referral programs offered by other paid survey websites (where sites like PaidviewPoint pay up to $25 per referral). With pay this low, it likely isn’t worth the hassle of persuading even your best friend to join the app, unless you know for sure they’re looking to make some extra money using their smartphone, or you yourself have fallen in love with Attapoll.

What rewards are available with AttaPoll? 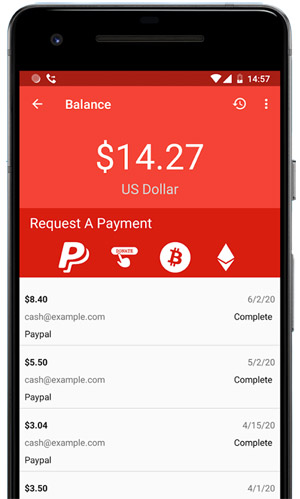 Once you’ve earned at least $3, you can request a cash payment to your PayPal account.

Alternatively, if you have earned at least 250 credits, you can convert it into Ethereum. You can also get paid to your bitcoin wallet, however you’ll need a much higher credit balance (about $100!). If you’re interested in general about earning cryptocurrency taking surveys, check out more information here on taking surveys for bitcoin.

If you’re feeling generous, you can also choose to donate your earnings to charity once you’ve earned at least $1.

How quickly can you earn rewards with AttaPoll?

You can choose the frequency which the app offers surveys to you. However, this somewhat unique feature appears a bit pointless. That’s because, if you set the frequency to ‘as frequently as possible’ – the amount of surveys made available is unlikely to impress anyone but the most casual users.

You’ll need to be very patient with AttaPoll in order to earn significant rewards, though users with backgrounds or occupations that are in demand may experience a higher level of success with the pap. With this in mind, you may want to consider the speed you can earn money with other paid survey websites and look to other options.

What are the alternatives to Attapoll?

These are more suitable options other than Attapoll if you’re looking to quickly earn money answering surveys on your smartphone. Check out these:

Pros and cons of Attapoll

AttaPoll is a simple mobile app, which is easy to use, functions well and has a low withdrawal threshold. Sadly however, it doesn’t pay anywhere near as well as similar paid survey websites available on mobile. If you’re looking for a new surveys app, or want to shake up your survey taking with something a little bit different, you might consider giving Attapoll a try.