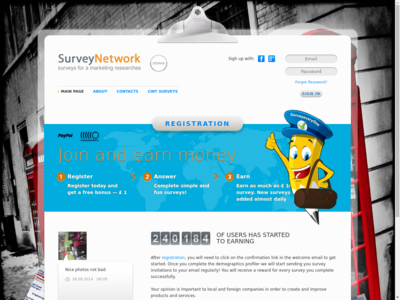 SurveyNetwork is a panel exclusively available to United Kingdom residents. The panel offers many surveys where members can share their unique insights and experiences on a variety of topics! SurveyNetwork collaborates with CINT, a company that manufactures and markets leading research products online for businesses, organizations and individuals engaged in market research. CINT is headquartered in Stockholm, Sweden, with offices in Europe and the USA.

Registration is quick, easy and you will automatically be given a bonus of £1.00 in your account to get you started with SurveyNetwork. Once you have registered, make sure to click the confirmation link on your initial email to get you started.

Each survey pays up to £10 for completion. SurveyNetwork guarantees to send you as many surveys as possible and many members will receive surveys daily - making it easy to rack up points quickly! A £20 minimum account balance is required to request a PayPal payment.

Refer your friends and extended family members to SurveyNetwork.co.uk and receive 10% of whatever your friend earns, for life! Simply log into your account and grab your unique referral link to share with friends.

CINT is a market research company that works with many smaller survey panels to engage specific demographics all over the world! Since SurveyNetwork has teamed up with CINT, they can offer a larger variety of more entertaining surveys on a diverse collection of subjects. If you participate in a CINT survey you will receive payment in a different manner on SurveyNetwork. Payment will always be sent 15 days from the day that you complete the survey.

SurveyNetwork follows the highest standards when it comes to market research and survey taking. They follow the standards of ESOMAR, CASRO and MRA. Your information is secure, will always be viewed in aggregate form and will never be shared with a third party.

they lie and take your points and rewards
this is a complete waste of time , they have a point system,, if you complete one survey , you get one point,, but then, their trick is,, they reject many of your surveys, by falsely accusing you of speeding, or not reading the questions correctly, and then,, deduct from your points minus 20 points.. so they can wipe out your points in 10 mins.. I have recorded myself completing a 10 min survey, by doing it in 20 mins, and yet,, still got it rejected with the false allegation of speeding.. they did admit after one month of me complaining, that they had a error with their software,, but then refused to admit that it cost me my reward money .. one week later my surveys are being rejected again, 50 points in one hour,, and again, they are blaming me for cheating.. I have had numerous members on fb also complaining,, but seems the people who check the surveys,will not admit they do not know what they are doing. They do not have the brains or common sense to even realise,, we see and complete the same surveys, many times, even on the same day.. so they think each time we need to read the same questions, when in fact we know what the questions are before they even appear..they are so eager to take your points and get you closed down, I do not even know why they bother to send surveys out for. I have done the same survey 6 times in one day,, and yet,, 2 were rejected, despite me taking the same time and giving the same answers. again, showing they have no idea and no consistency to their checks... do not waste your time with this company .. you will spend hours completing surveys, just for them to falsely accuse you of cheating and take away your rewards.. they say they are listed in the usa, and yet their company is actually in Latvia,, This one used to be good,, now they steam your email with more than 200 survey emails a day,, of which only 20 will have a survey that you qualify for, they pay a measly 15p for the majority of the surveys and never pay on time,, in fact every 6 weeks or so,, they will not pay out at all,,, their support email never will get a reply and a woman called angela seems to be the only person that works for them,, and she only replies when it suits her.. if you do not get paid,,, she will never reply to your enquiry . a lot of surveys you will complete and then be told you do not qualify ,, and of course no way to report these to get your money back.

I have emailed them four times in the last few weeks asking to change my email address. I have not had so much as an acknowledgement from them.

Used to be good

September 7, 2018 by Simona from United Kingdom

Hello,
6 years ago when I first joined surveys websites,this website used to be good,always paying on time,very transparent,well,NOT ANYMORE.It has been more than a year since I find it very difficult to keep track of MY OWN work on their website,I do not know which surveys are paid, when.When I provide evidence of my work(screen prints),they often find pretexts to complain,the screen print is too big,too small and so on and so forth.It is virtually IMPOSSIBLE to check which survey I'm getting paid for,because when you complete a survey you are given one number for that survey,but on the website you will find,that the same surveys you filled it have different numbers and that makes everything IMPOSSIBLE to check.Today was the last drop when I was told,that surveys I know I wasn't paid for,they claimed that I was..The saddest thing is that this website USED to be one of the best.
And just when you thought they couldn't get any worse,they had,by reducing even more the amount they pay per survey,from a fixed amount to an "up to" amount,making it absolutely impossible for panelists like me to keep track of their earnings,the way things are now,they can literally pay as much as they want,when they want and there is absolutely nothing I can do about it...

it is a very good online website for earning, by doing surveys you can earn and its trusted as well.

I used to do surveys for this company with no problems then lately I was getting loads of emails from them 100 in one day ,I wrote to them asking them to stop sending so many as half of them were the same link to same survey! No answer and got double yesterday 200 emails! I contacted them again and got reply this time saying I could always unsubscribe ! Very nasty reply followed when I said I would be reporting them saying if I did they would close my account. I have now closed this account.Horrible company!